Early writing and printing in the Philippines

Printing and publishing began in the Philippines with the arrival of the Spanish in 1565. Encountering an enormous number of native languages, the Spaniards felt a pressing need to describe the languages most commonly spoken in the archipelago in order to communicate with the Filipinos. With the establishment of Spanish sovereignty over the Philippines, the Spanish Crown issued several contradictory laws regarding language. The missionaries were urged to learn the vernacular languages but were subsequently required to teach Spanish. For this reason, missionaries learnt the Philippine languages by writing vocabularies, grammars, and catechisms.

Philippine linguistic writing – grammars and vocabularies – is extensive and exhaustive. There was a pre-Hispanic writing system in the Philippines, baybayin, but it was used for personal communication and not for recording literature or history. For this reason missionaries had to start from the beginning. By describing the languages they contributed to their survival. In the last decades scholars have studied manuscripts and early editions of Tagalog, Bisaya and Ilocano texts and have been re-editing them. This is the case for Arte y reglas de la lengua tagala (1610) by Francisco Blancas de San José (1560–1614) edited by Quilis in 1997; Bocabulario de lengua bisaya, hiligueyna y Haraya de la isla de Panay y Sugbu y para las demas islas (1632) by Alonso de Méntrida (1559–1637) edited by García–Medall in 2004; and Arte de la lengua japona (1732), Tagalysmo elucidado (1742) and “Arte chínico” (1742) by Melchor Oyanguren de Santa Inés (1688–1747), edited by Zwartjes (2010). There is also an unpublished PhD dissertation about the Calepino ylocano (ca. 1797) of Pedro Vivar (1730–1771) and Andrés Carro (?–1806) by Fernández Rodríguez (2012).

In the 18th century, eight dictionaries were written, two of which were reprints and eleven more are supposed to be lost; four new grammars and ten reprints are still extant while ten grammars are lost. In the 19th century sixty-seven vocabularies, fifteen of which were reprints were written and seven are lost. Forty-four new grammars were written, twenty reprinted and only six lost. Despite their importance, many vocabularies and grammars remain unpublished or survive in a handful of copies generally found only in specialized research libraries or in private collections – sometimes not even catalogued properly.

Printing was very expensive and the benefits very few but in the Philippines it was a basic necessity. In 1593, just twenty-eight years after the arrival of the Spaniards, Father Domingo de Nieva (ca. 1570–?) built the first printing press in the Philippines with the help of the Chinese printer Keng Yong (?–?). It was a simple xylographic press (the wood was carved, inked and transferred onto paper) but it meant the first step to the publication of a hundred of books in the Philippines.

In 1606 movable type printing in lead made its appearance in the islands (Revel 2001:260). By 1610 the press was no longer in Chinese hands and the religious orders sold it from one Order to the other because they could not afford it: first to the Dominicans, then to the Franciscans, in 1618 to the Augustinians, and then back to the Dominicans in 1622. Any printed work had to include some basic information: the front page had to show the title, the author, the dedication and an illustration; and at the bottom the name of city, the printer and the year. It had to contain all the licences and taxes (Carreño 2004). 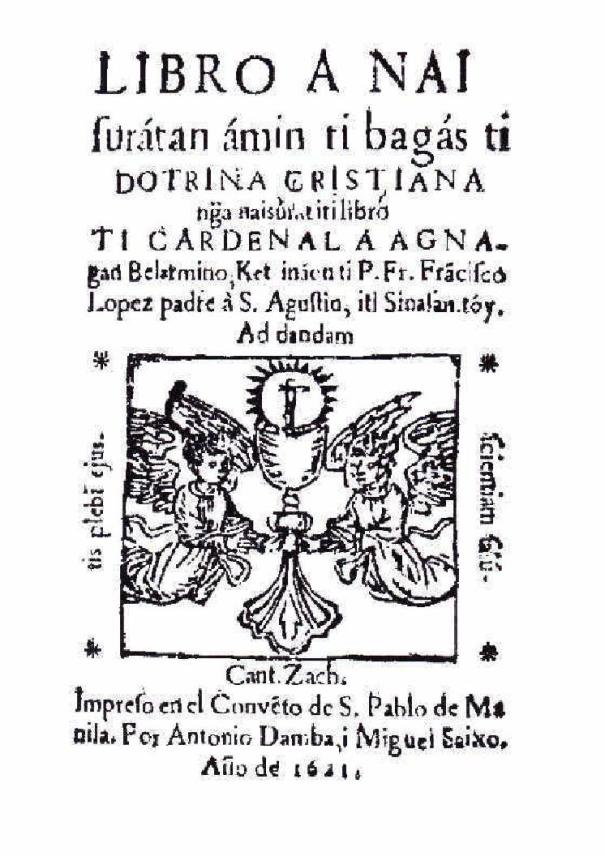 Most of the texts were not meant for Filipinos but some simple prayer books, rosaries and a summarized Doctrina Christiana were published for their evangelization. Books usually travelled by hand from one missionary to the other. They were copied and copied again and additions were made. It was very common that missionaries corrected and added information on the margins since missionaries had the obligation of correcting and completing former missionaries’ works.

A bilingual Spanish–Tagalog catechism Doctrina Christiana by Franciscan Juan de Plasencia (1520–1590), corrected by Dominicans (Fernández 1979:358), and a Doctrina Cristiana in Chinese were published in 1593. These were the first books to be published in the Philippines. Plasencia’s text had been approved in the Synod of Manila in 1582 and it was the official text for many years (Bernad 1972:255). It was written in Romanized Tagalog and Spanish.

Missionaries at an early stage recorded everything they knew about culture and language. Contrary to what it is commonly believed, missionaries preserved the baybayin, the pre-Hispanic writing system, by copying it and explaining it in their books. Augustinian Francisco López (?–1627) with the help of Pedro Bukaneg (1592–1630), who is considered the father of Ilocano literature, translated Roberto Bellarmino’s (1542–1621) Doctrina Christiana into Ilocano in 1621. Its peculiarity is that it is written in Roman characters and baybayin.

Baybayin has seventeen symbols: three vowels (<a>, <i/e>, <o/u>) and fourteen consonants. Each symbol was pronounced with vowel <a> and Filipinos used to know – although missionaries were unaware of – how to pronounce it with the other two vowels. This system seemed extremely difficult for the missionaries to read. For this reason they wrote the sounds as they heard them in the Roman script.

López decided to introduce a cross named kudlit, a diacritic placed above or below the basic symbol to indicate its pronunciation. If the cross was above the symbol, it was pronounced with /i/ and if the cross was below the symbol, the syllable was pronounced with /u/. Spelling had changed and kudlit was introduced. It was a controversial modification and not everybody liked it.

Missionaries preserved the baybayin because it was very useful in the early years to evangelize since the Filipinos could learn the Lord’s Prayer and the Hail Mary in a script they could recognize. Nevertheless, it was very difficult to translate from Spanish into baybayin. Considering the usual difficulty in translation between two languages that share the same script and most of the time the same etymology, imagine the problems of translating into a language of which they were still no experts and which lacked many necessary religious terms. However, as the years passed, it was much easier for them to Romanize the languages, written as the missionaries heard them.

Baybayin was explained in vocabularies even when it was no longer useful. A monolingual Ilocano vocabulary from the late 18th century, the Calepino ylocano (ca. 1797), contains an explanation of the pronunciation and shows the symbols taken from López’s writings. However, this is not Ilocano baybayin but Tagalog because these were the fonts available in the printing.

In spite of copying and explaining the baybayin in vocabularies and grammars, the truth is that Filipinos stopped using it in favour of the Roman script, which was easier to learn and was taught in schools.

Let’s look at linguistic texts in the Philippines. It is believed that Plasencia also wrote an Arte – grammar – and a vocabulary in Tagalog but they were never published. However, the first printed Tagalog grammar was Arte de la lengua tagala by Dominican Francisco Blancas de San José in 1610, printed by Tomás Pinpin (1580–?; Bernad 1972:255-256). Pinpin, of Chinese origins, was also the author of the only Spanish grammar written in Tagalog in those years: Librong Pagaaralan nang mangca Tagalog nang uicang Castila (1610). The first printed Tagalog vocabulary was Vocabulario de lengua tagala (1613) by Franciscan Pedro de San Buenaventura.

Missionaries in the Philippines used Elio Antonio de Nebrija’s (1441–1522) grammars, Introductiones latinae (1481) and Gramática de la lengua castellana (1492), as a guide to explain all the new languages they encountered as well as previous grammars from America or the Philippines. López explains in the prologue of his grammar that he has used Nebrija’s as a guide and an old Tagalog grammar (Fernández Rodríguez 2012:14-15).

Grammars used to include linguistic varieties, phonology, morphology and syntax. They were full of examples and translations and missionaries were encouraged to speak with the natives. Pronunciation was not easy so the best way to learn was to communicate. It is evident that describing these agglutinative languages according to a Latin system was not the best but they were really clever and ingenious in searching for an adequate way to establish the structure of these languages. Most of them were aware of the inadequacy of the Latin system.

Philippine vocabularies are bilingual, extensive and present their entries in alphabetical order. Their entries are brief with simple equivalents and sometimes with discursive texts. There are distinct entries for different senses and there are derived forms following the basic form for a particular sense. Cross-references are quite common and there is sporadic specification of grammatical information.

There is one exception that follows Ambrogio Caleppio’s (1440–1510) lexicographical style: the monolingual Calepino ylocano. It has entries with discursive texts. There are different senses in a single entry. There are many examples of use and references are made to authorities. The vocabulary elaborates a general meaning.

These linguistic works have contributed to the preservation of the Philippine languages and their pre-Hispanic writing – baybayin – and made significant contributions to Spanish lexicography.

Bernad, Miguel A. 1972. The Christianization of the Philippines: problems and perspectives. Manila: Filipiniana Book Guild.

Ferndández Rodríguez, Rebeca. 2013. ‘Early writing and printing in the Philippines’. History and Philosophy of the Language Sciences. https://hiphilangsci.net/2013/07/10/early-writing-and-printing-in-the-philippines

9 comments on “Early writing and printing in the Philippines”