At the end of the 18th century, Russian Empress Catherine II wanted to compile an atlas of the world’s languages. She commissioned first the German Peter Simon Pallas (1741-1811) and then the Serb Fyodor Jancovich de Mirievo (1741-1814) to publish a book containing the translation of a list of words into as many languages as possible. In 1785 Pedro Normande, Spanish chargé d’affaires at St. Petersburg,  sent a letter to Spanish king Charles III. It was a petition including two lists: the first a list of fourteen grammars and vocabularies from America and the Philippines, including such titles as the Vocabulario de pampango en romance (1732) by Diego de Bergaño (1690-1747), and Arte breve de la lengua aymara para introducir el Arte grande de la misma lengua (1603) by Ludovico Bertonio (1552-1625); and the second a list of 445 words to be translated into the different languages spoken within the territories of the Spanish Crown. Charles III agreed to the petition and directed the viceroys and governors in America and the Philippines to buy or copy the books and translate the words. They did so; and from 1789 to 1791 boxes of books and documents arrived in the Archivo de Indias in Seville and in the Real Biblioteca in Madrid. However, Charles III soon died and his son, Charles IV, inherited the Crown. This fact, among others, contributed to the lists and books never leaving Spain.

Apparently, although it was not in the list of books sent by the embassy in Russia, a bilingual Ilokano dictionary, Tesoro del ydioma yloco, was sent among others from the Philippines. For more than 200 years, scholars thought it lost, but it has in fact been in the library of the Palacio Real in Madrid all along. It is a copy made between 1781 and 1784 in Batac for the personal use of the Augustinian monk Agustín Pedro Blaquier (1749–1803), who loved books and whose library was believed to be one of the richest in the Philippines. It is made up of two volumes, one Spanish-Ilokano (1782–1784) and the other Ilokano-Spanish (1781–1782).  It is, so far, the oldest Ilokano dictionary currently available.

As it is well known, Augustinian Francisco López (?–1627) started the first Spanish-Ilokano dictionary in the first quarter of the 17th century. Unfortunately he died before finishing it. Many years later, two Augustinians, José Carbonel (1665–1711) and Miguel Albiol (?–1710), completed López’s early dictionary in a volume called the Thesauro or Tesoro (ca. 1710).  The prologue of a later dictionary (Calepino ylocano ca. 1797) explains that the Thesauro contained so many mistakes that another Augustinian, Pedro de Vivar (1730–1771), was commissioned to compile a new dictionary, which he finished by 1760 but never printed, even though he had the printing licenses between 1760 and 1762.

Vivar arrived in 1752 with the 49th Augustinian mission to the Philippines. Another Augustinian, Francisco Romero (1729-?), arrived with him. Both were sent to the mission in the Ilocos Region, but first they worked among the Igorrots. Their task was to teach Ilokano to the Igorrots in an attempt to ‘civilize’ them. Vivar started his mission in Benguet in 1754 but Romero had to stay behind in Agoó where he would learn the language with the help of the village prior. Unfortunately, they had no Ilokano books, no grammar, no vocabulary, and so they sent a letter to the bishop complaining of the lack of books. Both Vivar and Romero travelled from the north – Amianan – to the south – Abagatan – of the Ilocos Region, where they learnt the various lexical differences between the dialects. However, Romero returned to America very soon after that, in around 1775.

Vivar thought it was easier to learn the Igorrots’ language than to teach them Ilokano, especially since he did not have any books. Accordingly, he convinced his superiors that there was need for a vocabulary of Ilokano. He began work on the vocabulary, but had to call on the help of his colleagues, since he was too busy travelling to complete the task on his own. He assigned each missionary who could speak Ilocano one alphabetic section of the Tesoro, the only dictionary available at the time, for them to correct, add or delete content, as was needed.

In the prologue of this copy of the Tesoro there is a story about a colleague of the author named Francisco Romero. Only Vivar could have known him and written the story. My hypothesis is that once he had all the corrections from the other missionaries, he edited them and added the prologue. Another clue supporting this hypothesis is that this copy mentions whenever a word is used only in the Amianan or in the Abagatan dialects, and Vivar had spent enough time in the region to be able to distinguish the words and know where they came from.

It is also known that Vivar sent this book to the printer but that it was never printed, although the reasons why it was not printed are still unknown. After that, he probably kept working on the dictionary until his death. The result of his efforts is called the “Adiciones al vocabulario Ilocano” (Additions to the Ilokan vocabulary; Pérez 1901: 297), which contains proverbs, adagios and riddles in an appendix. This appendix was later added to the text, as it can be seen in this copy.

These two volumes are a neat copy of the Thesauro first compiled by Carbonel and Albiol, based on López’s vocabulary, and improved by Vivar. Its exhaustiveness, ethnographic information and lexicographical style make it one of the most interesting vocabularies in the Philippines. The first volume, Spanish–Ilokano, has a 9-page prologue and 650-page one-column vocabulary of around 11,000 entries. The prologue describes the structure and content of the vocabulary and prosody. It also includes geographical information and an explanation of the Baybayin (see Fernández 2013) . He states that whenever the reader has doubts on use, he should check the Arte de la lengua yloca (1627) by Francisco López. The second volume, Ilokano–Spanish, has the title page followed by a 525-page vocabulary in one column and almost 8,000 entries. The first volume was bound in the Philippines. The second volume, however, arrived in the Real Biblioteca as loose pages and it was bound there during the first quarter of the 19th century.

Typical in Philippine vocabularies is the inclusion of proverbs and swearing. Here they are no longer listed in an appendix, but rather in the main text, under the head word. They are also marked in the margins as a way of helping the reader to find what he is looking for. All the examples of usage have their Spanish equivalents. As mentioned above, the author indicated whether the word came from the north or the south of the region. Entries can be as simple as just a short line containing the equivalent or an explanation, or very long, including the equivalent, examples of use and words of the same semantic field. Surprisingly, and contrary to other Philippine vocabularies, after each entry there is no indication of the accent penúltima producta (PP) or penúltima correcta (PC). 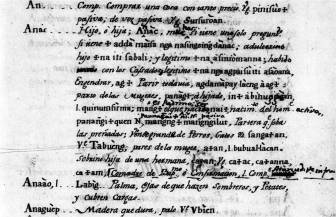 To sum up, this is a recently discovered manuscript of a bilingual Ilokano vocabulary from the 18th century. It fills a blank in the history of this language and it confirms the cumulative effort of the missionaries in the compilation of linguistic works,  especially in vocabularies. Its comprehensiveness and lexicographical style, similar to other Philippine vocabularies of the time, confirm that there was a “Philippine lexicographical school”, different to other lexicographical traditions.

Ferndández Rodríguez, Rebeca. 2013. ‘Early writing and printing in the Philippines’. History and Philosophy of the Language Sciences. https://hiphilangsci.net/2013/07/10/early-writing-and-printing-in-the-philippines